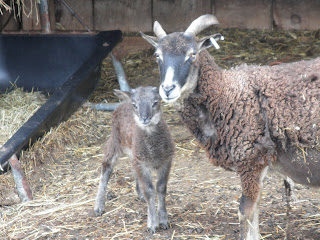 This season one of our older ewes gave birth to twins. She, Dalilah, has consistently given us a healthy lamb since her first breeding season five years ago. She is a great mom and always raised healthy lambs. This season we noticed that she was much larger than any previous season and initially we anticipated that she would be the first ewe to lamb instead of the last. We raise heritage breeds because they rarely need help lambing and if you leave them alone you will find a healthy lamb feeding on her mother the next day. We were concerned that she was so large and noticeably uncomfortable that I broke my rule of leaving her alone. She was very vocal while giving birth and I would check on her frequently. I spooked her with a flashlight just while she was dropping her second lamb. At that point I left her alone for the night and visited her the next morning. It was clear the next morning that she did not bond with one of the lambs. I called my brother the help get the lamb some initial feedings of colostrum from the mother which is important for future health and needs to occur in the first 24 hours. We tried some techniques for bonding the rejected lamb with the mom all with no success. We had our first bottle lamb after sixty lambs born over the years. Bottle lamb feeding is relaxing but requires a commitment. Four feedings a day for the first ten days then three feeding a day until weaned in six to eight weeks. Occasionally folks look for bottle lambs as a family projects so we decided to list the lamb for sale as a bottle lamb looking for a committed family. We expected the lamb to be sold as a pet and not necessarily to a Soay breeder. We received a call from a lady who already had two Soay and had a home based business. After some conversation we realized that she bought the Soay from us the previous season. Of course the home based business was a limousine business and yes the bottle lamb was picked up in a limo.
Posted by Elwood Orchard at 6:43 AM No comments: