Not Quite the Way it is Suppose to Work 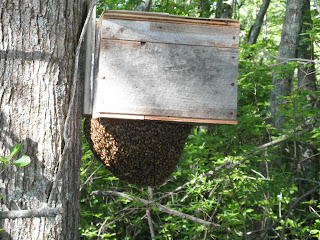 Bee swarming has become more of a problem for us in recent years. Bees swarm when they decide they (the worker bees) want to raise one or more new queens and find a new home taking honey with them to establish a new hive.  This leaves the original hive weaker, less worker bees, and less honey.  Prior to finding a new home they pause outside the hive, usually in a tree while scout bees search for a new home.  In the past we were lucky enough to notice the bees waiting to find a new home and were able to capture them.  This was always a hit or miss operation, requiring luck and depending on how high up in the tree they were an element of danger. This past winter we read a book describing how to build and set up swarm bait traps.  We liked this idea since it allowed the swarm bait trap to act as the temporary home and took some of the luck and a lot of the potential for an accident out of the capture.  The trap is baited with lemon oil and the dimensions are right for the bees to consider it a home.  The way it is suppose to work is that they will set up residence inside the trap and we would block the entrances at night and remove the hive to an area we are going to set up a new permanent  hive and transfer the bees the next morning.  Well as you can see it didn't quite work out the way it is suppose to.  The bees decided in their wisdom to establish the colony below the swarm bait trap.  We were still able to capture the bees and it didn't require a ladder which was the whole point of using the traps in the first place so we are not complaining.   This is also a way to capture bees for your garden and use the trap as a permanent home.  The name of the book is "Swarm Traps and Bait Hives" by McCartney Taylor.
Posted by Elwood Orchard at 7:07 AM No comments: 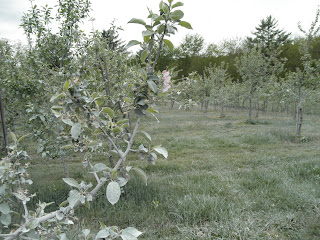 This is the time of year were the orchard looks very unnatural with all the apple trees having a white haze.  The white haze is multiple layers of kaolin clay.  Kaolin clay is a naturally occurring mineral that is used in prepared foods, toothpaste, baby power and is were "kao"pectate derives its name.  The orchard formulation of kaolin clay is called Surround.  Surround was the final piece of the puzzle in making organic apple growing appear economically feasible in the Northeast.  Surround works by being an irritant to insects and creates an unnatural environment.  Surround applications are the only practical method of controlling the insect Plum Curculio (PC).  Surround is placed on the trees at petal fall in three separate sprays to create a layering effect and reapplied after rains until the PC mating/egg laying season is over, estimated at early June this year.  It need not be said but, Disclaimer: If you use Surround always follow the label, not my musings.
Posted by Elwood Orchard at 1:52 PM No comments: 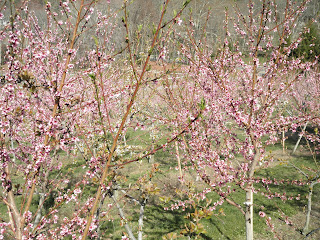 Two years ago we planted two very late ripening peach varieties between our asian pears.  The thought was that we would replant a new area with pears and mange them organically and expand our nectarine and peach orchard by combining two adjacent fields. As the peaches grew we would cut down the asian pears and rely on the new pear orchard.  The peaches are doing really well as can be seen in the image.   The pears not so well.  The peaches are Flaming Fury Big George and Autumnstark and if all goes well we should be picking them during apple season.
Posted by Elwood Orchard at 3:54 PM No comments: 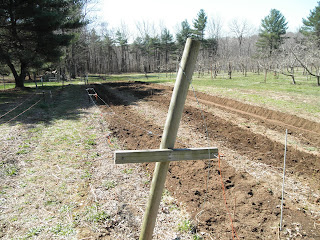 The right side of the image is a new planting of Himbo Top red raspberries. Folks who have picked raspberries from our little patch in the past will recognize that the image is the area we previously grew Kiwi Gold raspberries. We originally planted Kiwi Gold to have a yellow raspberry to go along with Heritage and Autumn Bitten, our red raspberries. While we really like the taste of Kiwi Gold, when picked ripe, we and our customers found it difficult to identify the color phase when Kiwi Gold is at its best flavor. This difficulty caused us to make the decision to replace the Kiwi Gold with Himbo Top.
Because of disease concerns it is not advisable to replant raspberries in an area that previously grew raspberries so, although not ideal, our workaround was to plant the Himbo Top in the walking path next to the Kiwi Gold and use the Kiwi Gold row as the new walking path. We really like the flavor profile, picking characteristics, and disease resistance of Himbo Top and look forward to trying them in a year or two.
Posted by Elwood Orchard at 2:32 PM No comments: