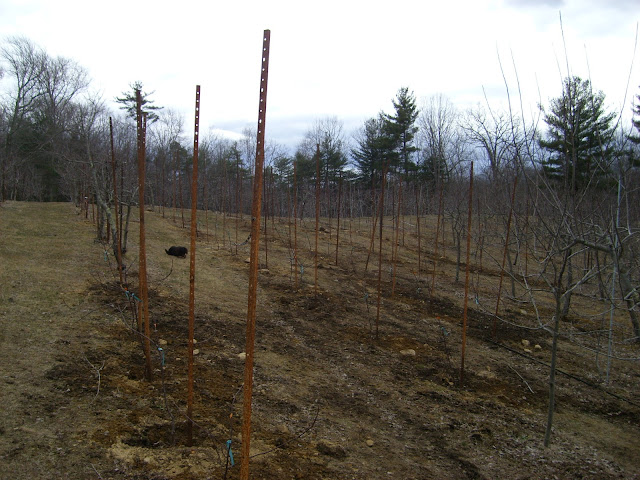 This season we decided to replace many of our JonaFree trees.  These were the first apple trees we planted back in the early nineties.  We kept about twenty trees because we liked the fruit however they have a tendency to drop when they ripen.  This obviously is a big problem for a pick your own (PYO) orchard.  In addition to losing the fruit the clean-up was very time consuming.  Back when we were a conventional orchard we were able to use a spray that held the fruit on the trees during the PYO season, making dropping less of an issue.

The replacement trees will produce a fruit called Sansa.  We are excited about Sansa which is a straight cross between Gala and Akane, and was developed in Japan.  Sansa contains Gala's inherent sweetness along with Akane's disease resistance.  We expect to begin seeing fruit in two to three years with full production in about five years.  By the way that is Raven laying down waiting for me to finish taking pictures.
Posted by Elwood Orchard at 3:41 PM No comments: