Where are the Sheep? 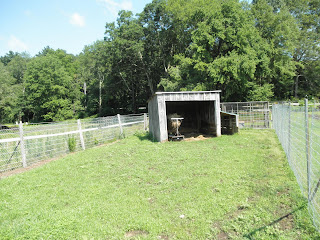 Shortly after we sold the bottle lamb this year we received a call from another family that purchased a starter flock from us last year. This family really liked the Soay and wanted to expand there flock. In discussing what they were looking for I suggested that they might want to purchase our entire flock. The combined flock come from three distinct blood lines with the newest line from our purchase of a lamb ram out of New York last season.. They now also have a ram and ewe that are pure "Johnson" line. The "Johnson" line was the original line of Soays prevelant in the New England area and were the Soay we began with back in 2003. We sold the sheep for a few reasons. Although we really like Soay we were ready for something different and this was an oppurtunity to place the entire flock with a family that wants to raise and breed Soay. Another reason was that we wanted to replace all the fencing in the front of the sheep's pen with new fencing and make a number of other infrastructure changes in that area. What's next for animals at Elwood Orchard? Not sure, we have a few ideas but some of our first thoughts are turning out to be difficult to find, but we are still working on them... stay tuned.
Posted by Elwood Orchard at 12:55 PM