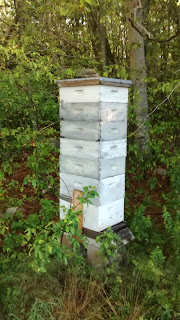 This has been another interesting year at our Foster apiary.  We started the season with a strong hive and two brand new hives. Each new hive started life as a queen and three pounds of worker bees. Usually you have a good year if a new hive gives you one super worth of honey once in a great while you can get two supers worth of honey.  A honey super is the boxes above the bottom two larger boxes.  The bottom two larger boxes are for the bees to store honey and pollen and raise bees and survive through the winter. The above boxes are for the bee keeper.

The two new hives were first installed at the North Scituate orchard to help in apple and pear pollination. Unfortunately the weather was horrible and they pretty much lived on the sugar water we provided.  Once pollination was over we moved them to the Foster Apiary.  One hive was doing well and the other was weak and had a queen problem.  She was there just not producing much.  Things got busy and when I went back to see if I could put on any supers the weak hive was almost gone. The other new hive was doing really well and I suspect that the bees from the now queen less hive started migrating to the stronger hive.  Today August 23rd we were able to remove five full or almost full honey supers from one 2016 hive.